This week, Prime Minister Theresa May signed off the Swansea Bay City Region deal, stating that she wants Wales "at the forefront of science and innovation".  The plan is expected to create nearly 10,000 new jobs and trigger almost £1.3bn of investment in south west Wales.
Andrew Barry, Peter Alan Managing Director, said “The approval of the city deal is great news for the region, with a massive number of on-going and planned developments coming to fruition over the coming years.

This is a really exciting time for Swansea and this is a key reason why we have also decided to invest in the area.  We have recently opened a new branch in Swansea Marina, and have further plans for the region for the future.”

The ambitious city deal plans involve a total of £6 billion of innovation and investment a variety of projects including:

Rob Stewart, Swansea Council Leader, said “Swansea will soon be undergoing its biggest transformation in 70 years as we significantly improve the city for residents, open up thousands of new jobs and generate far more opportunities than ever before.”

Swansea Council is also awaiting a decision on the world’s first tidal lagoon in Swansea Bay which, if approved by government, would double the investment in the area to £2.6 billion, representing the biggest ever investment in Wales.

Andrew Barry continues, “Swansea is already a great place to live, due to its combination of coastal and city living and this will only develop further in years to come.  We fully support this comprehensive package of regeneration projects which will benefit local people with the creation of jobs and new facilities; support existing and new businesses; and hopefully lead to even more investment and development in the future.”

Take a look at a fly through video, showing the massive scale of Swansea's £6 billion City Deal ambitions, from Wales Online: 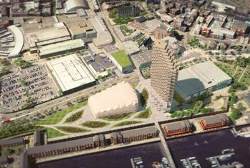