Local estate agency Peter Alan is celebrating after its parent company Connells Group won Gold in the National Estate Agency of the Year category at the prestigious Estate Agency of the Year Awards, held in association with The Sunday Times and The Times.  At a gala ceremony at the Hilton London Metropole Hotel on Friday 2nd December, Connells Group was presented with its award by celebrated film and TV actor and Spandau Ballet bassist Martin Kemp, with renowned journalist, author and newsreader Penny Smith acting as compere. 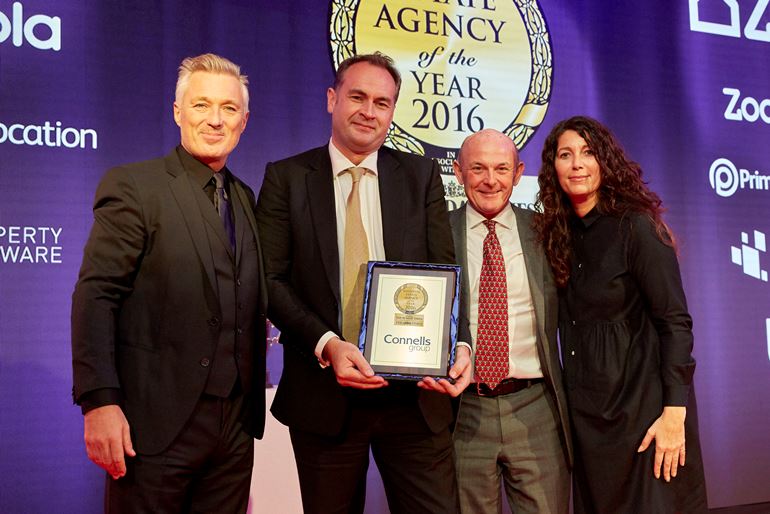 The award judges’ report said that Connells Group is "respected in the industry.... [and] a great all-round company operating to a successful formula but always with one eye on innovation".  The Group's commitment to its people was also highlighted with the judges commenting that "the board empowers their team.... [offering] a defined career path and rewards to retain the best people - they enjoy unrivalled retention."  Excellence for customers was also congratulated with mystery shopping results deemed "excellent" and the "level of service offered great...aided by the contact centre and software".  The panel was also "impressed with the number of new branches opening on the high street."

“We are thrilled to have won this award and to be recognised as part of the top national estate agency group in the UK,” says Andrew Barry, Managing Director at Peter Alan.  “This is a fantastic achievement and testimony to both the high quality services we provide and our success at helping customers with their property needs.  I am very proud of everyone in the business for their contribution towards this terrific accolade.”

Award winners were decided following a rigorous and thorough judging process by a panel of industry experts who assessed initial entry submissions before conducting an extensive review of the entrants, which included telephone interviews and mystery shopping exercises. The whole of the judging process was overseen by The Property Ombudsman, Katrina Sporle, as Chairperson of Judges, alongside David Mackie, President of the NAEA who acted as Arbiter.  Now in its thirteenth year as a dedicated competition, these awards have become widely recognised as the most prestigious and difficult to win.